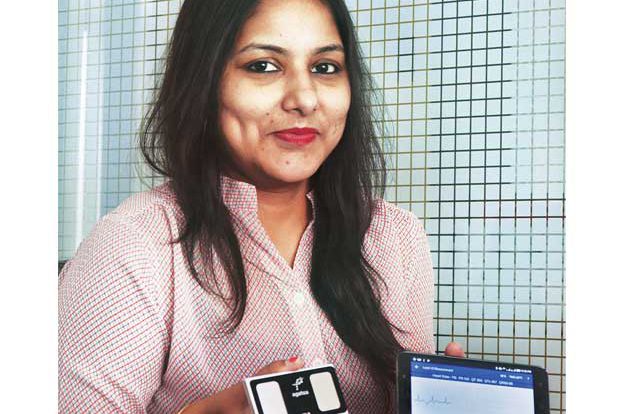 Sanket is a pocket-sized ECG monitor which helps people measure their heart function, providing early signs of a crisis

Agatsa, founded by Neha Rastogi and Rahul Rastogi, has started selling Sanket to ONGC, which plans to use it for its field engineers in distant locations, and is in talks with the Border Security Force

Sometime in 2011, Neha and Rahul Rastogi faced a personal emergency. Rahul’s father was admitted to hospital after complaining of a heavy feeling in his chest, and tests showed he had been on the brink of a massive heart attack. That near-crisis and the drudge of regular follow-up tests after angioplasty for the elder Rastogi set husband and wife thinking. Heart attacks are notoriously difficult to detect. A gadget to help people monitor their heart function on their own, at home, would go a long way towards providing an early warning signal of a crisis.

Research showed that there was no such gadget in the market. For Neha and Rahul, then electronics engineers in information technology services firm CSC and Samsung, respectively, this gap in the market provided an opportunity to develop a product that would offer a much-needed health care solution. Agatsa Software – the company they set up with their own funds with friends and family chipping in – started out as a rudimentary home lab in which the two studied the essentials of the ECG machine and how it captured information on the heart function and worked on developing a miniature model of similar efficiency. The principal challenge lay in developing sensors in place of the leads that are connected to different points on the chest.

By 2013, a prototype was ready. A masterpiece of frugal engineering, it involved a micro-circuit in a plastic casing marginally larger than a standard credit card with two thumb sensors that transmitted the read-out to a smartphone (even the most basic models could capture the information). The device, called Sanket (the Hindi word for signal), was showcased at an event organised by The Indus Entrepreneurs (TiE) called “Tie the knot”.

“We were selected as one of the top five start-ups at the TiE platform and, although we didn’t get much funding initially, we got some good feedback on the device,” says Neha Rastogi. A breakthrough came in 2014, when Sanket won the Anjani Mashelkar Award for frugal innovation, a multi-country contest that involved 300 entries. Subsequently, with some funds from the department of science and technology and mentored by an incubation centre under the Start-Up India scheme, Neha, 34, and Rahul, 36, worked on improving Sanket’s circuitry to capture more chest leads, first six and then 12, through sensors embedded on the side of the device.

In July 2015, Agatsa launched its first Sanket pocket-sized monitor. Currently available on Amazon, it is priced at Rs 9,999, about half the price of similar devices that, however, offer only a single-lead reading. Since quantities are still small – about 150 devices have been sold so far – manufacturing has been outsourced to a plant in Shenzhen in China. Agatsa has also filed three patents, of which two (for design and technology) have been granted.

Agatsa – a name derived from Greek – currently has a team of 16 working on the technology and the focus of the app development is towards bringing down costs (“we hope to eventually retail it at Rs 5,000-6,000,” says Neha). The sales drive is still conservative since the company is concentrating on getting feedback for continuous improvements, such as getting validation from the All India Institute of Medical Sciences and the Indian Council of Medical Research.

The aim is to plug into state health programmes where low-cost solutions for remote diagnostics are in demand. Demand from the Tata Trust has helped Agatsa work on a pilot in rural Tripura and UP. The company has started selling the device to Oil and Natural Gas Corporation, which plans to use it for its field engineers in distant locations, and is in talks with the Border Security Force.

Over the longer term, Agatsa is looking at a “complete fulfilment plan”. This involves extending its offering to measure blood pressure, blood sugar and blood oxygen as well as a paid service in which a panel of doctors can review the read-outs. The company has developed an algorithm that can measure stress levels through Sanket, and a foetal monitoring device is also being researched.

Agatsa’s focus, says Neha, is on low-cost innovation in which the social purpose drives the commercialisation of the product. Sanket, thus, is the first early signal of that mission.

BEFORE IT GETS TOO LATE